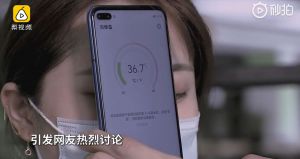 Chinese tech giant Huawei announced that its new smartphone will include built-in sensors that can measure body temperature.

The fever can be an early indicator of infection during times like these where the COVID-19 pandemic is a major concern. Huawei intends to integrate this thermometer in the Honor Play 4 Pro phone.

The infrared technology built into the smartphone will have the ability to measure temperatures up to 100 degrees Celsius.

In a video posted on Chinese social media site Weibo, Huawei demonstrated the phone and how the built-in thermometer would work on a person, via pointing the sensors at the individual’s forehead for a few seconds.

While IR sensors are not as accurate as thermal cameras, it is cheap to use and was in fact already integrated into most smartphones for facial recognition unlock and other camera effects. It was due to this that the tech giant was able to react to the pandemic very quickly.

The phone is expected to be available in China for around $420.