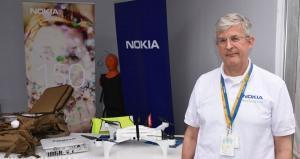 Nokia’s main interest at the Drones for Good showcase was to promote its Nokia Saving Lives non-profit initiative and demonstrate the power of technological progress to save lives in natural disasters. The initiative combines a network of partners, drones, applications and LTE communication in disaster areas.

“All of these factors need to work together to bring drones into effective use,” von Hardenberg told Active Telecoms at the showcase. “Building a drone can be done with moderate effort, but to bring a drone into a real industrial process requires the integration of every party that plans to participate.”

This year’s UAE Drones for Good competition featured twenty selected finalists from the UAE and around the globe to showcase the most creative and innovative usage of drones in providing technological solutions to modern day issues. On display during the two-day competition were drone applications for civil defense, search and rescue, healthcare, security surveillance and location delivery. In addition, the UAE AI & Robotics Award for Good supported innovation in the artificial intelligence and robotics sector.

The attention was on Nokia at the showcase for demonstrating the creation of an instant high-speed LTE network to establish connectivity between video camera-equipped drones and a control center. In October last year, Nokia became a member of the GSMA Humanitarian Connectivity Charter which aims to support improved access to communication and information for those affected by crisis in order to reduce the loss of life and positively contribute to humanitarian response.

Network connectivity is often the first priority of any rescue operation since it is often compromised in disaster situations. Therefore, Nokia's Ultra Compact Network provides a standalone LTE network to quickly re-establish connectivity to various mission-critical applications including video-equipped drones. Drones can stream video and other sensor data in real-time from the disaster site to a control center, providing inputs such as exact locations where people are stranded and the nature of the difficulty of reaching the locations.

“For Nokia Saving Lives, we’re showcasing our network technology, our ‘network in a box’ backpack, and also our drones which have LTE connectivity,” said von Hardenberg. “If you combine these factors it brings immediate benefits for whomever, but we decided that we want to bring it to rescue and disaster cases.”

The ‘network in a box’ backpack is basically a network that fits into a backpack, and the reason it’s in a backpack is because in a certain disaster situation, you might find that you have no connectivity to deal with at all, von Hardenberg explained.

“In a disaster situation, the cellular network might be broken down and the rescuers would come in and not be able to find broadband connectivity. Therefore, we took our small cell and integrated a core so that you can now register your own SIM card and have an isolated network on its own. The biggest benefit is that we use drones that can go beyond the camp of the rescuers are and stream the video data back – it’s a huge benefit if you have an LTE network.”

If more than one drone is used then rescue operations will have even more bandwidth to cover, von Hardenberg said. The LTE network package is small – about 5-6 kilos – so it can be transported easily. Users would need a PC to set it up properly and within in 5-10 minutes it would be working and could support the drone flight as well as the handsets of the rescue team.

“Typically, operators would make sure that their networks function wherever they are, and if they break down after one or two days they would try to have it set up again. But these one or two days might be critical, for instance, if you have people in an earthquake situation – every hour counts,” said von Hardenberg. “Today, rescue teams come in and typically have analog handsets so they cannot communicate effectively with broadband connectivity. That’s where our network comes in… the network is set up quickly and enables drones to do something that was not possible for rescuers to do before.”

Nokia presented two drones at the showcase. One of Nokia’s drones was tasked with flying up and analyzing the scenario  below which would provide an operator with information about what is happening in the ‘disaster area’; while the second drone was tasked with flying over the lake to scan it for ‘victims’ who, in a real-life scenario, could be caught in a flood.

A major aspect of Nokia’s demonstration was the control center. Just having drones fly and stream video isn’t enough for a disaster situation, said von Hardenberg – “we’ve introduced a control center which has data analysis integrated.”

The vendor also highlighted the fact that its project cannot work without the cooperation of rescue organizations – “we want them to take our technology with them,” said von Hardenberg.

“LTE requires a license to work on the frequency and typically it is owned by the operator. If the operator network is down for a critical 1-3 days, it would be good if operators could say to rescue organizations in advance, ‘If something happens in my area, I give you the right to use this solution on our frequency for these 1-3 days, and once we’re running again, shut it down’.”

There are many challenges facing the initiative, said von Hardenberg. First of all, drones with LTE are uncommon, so working with partners to integrate LTE into the drone is a challenge for Nokia. Another challenge for Nokia is realizing that rescue organizations and operators must be extremely careful and critical about what type of equipment they use – it requires a lot of testing.

“We are currently working with operators in countries to go into testing phases and we are also conducting rehearsal situations with rescue organizations,” said von Hardenberg. The initiative is currently being tested with NGOs and will be demonstrated at Mobile World Congress 2017.