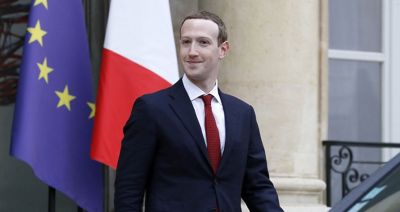 Mark Zuckerberg and French President Macron held a meeting at the Elysee Palace in an effort to crack down on the latest issues surrounding social media and the internet.

Facebook Chief Mark Zuckerberg said Friday that he was feeling “encouraged” and “optimistic” about the new regulatory framework that France suggested during the meeting.

The meeting comes after a report by top French civil servants was released which proposed that each European Union member state should set up its own regulatory framework for social media networks.

Zuckerberg expressed that he was “hopeful that it can become a model” which could be used throughout the EU.

The report titled ‘Creating a French Response to Make Social Media Responsible ‘criticized the efforts of online firms to self-regulate their networks and their “lack of credibility”.

It acknowledged that while social media platforms offer huge freedoms, they also “provoke unacceptable abuses of these liberties.”

On several occasions where disinformation was spread, the response from social media firms to tackle the issue was done way too late resulting in the damage already being done.

“[Self-regulation] lack credibility” as the lack of transparency in the industry “arouses suspicion over the reality of the action by the platforms,” read the report.

“The inadequacy and lack of credibility in the self-regulatory approach adopted by the largest platforms justify public intervention to make them more responsible,” the report read.

The tech giant’s headquarters are in Ireland, a low-tax nation within the EU, where they are responsible for regulating themselves.

“Through the excesses that they enable, social networks create problems in other countries, (which are) difficult to see by the home country,” read the report.

It proposes that each EU member state set up their own regulatory authorities to deal with social media-related issues rather than relying on the rules of the countries where the tech firm is based.

|the report comes after Facebook gave the French government access to monitor the company from the inside for 6 months.

“It’s time to break up Facebook,” he said and criticized Zuckerberg’s “focus on growth” which resulted in him having to “sacrifice security and civility for clicks”.

French President Emmanuel Macron has been trying to make France a global leader when it comes to tech regulation. He hopes to find the right balance to create a regulatory framework that does not restrict freedom nor over-regulate.

He wants to find a middle-ground between the US’s laissez-faire style of regulation and China’s complete regulation of the Internet.

She added, “There is a big problem about the hegemony of such big companies that rule all the digital area today.”

Users need protection and Avia strongly believes that Facebook has the resources to make this a reality and make the fight against hatred on the Internet a priority.